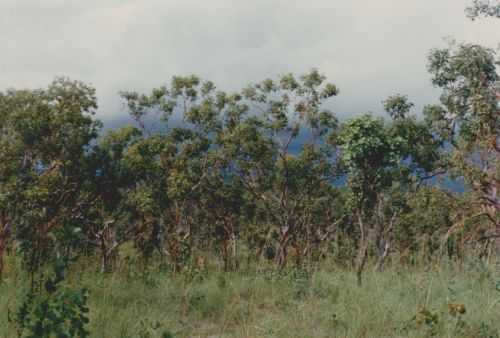 So it came to be, on my very first day in isolation, I had to teach myself how to drive and operate a backhoe and create a  track deeper into our 250 acres – to give the idea of scale, if the average size suburban block (in Australia) is 1/8 of an acre, you could fit 2000 houses onto 250 acres (leaving roads out of the equation for simplicity) – another good indicator of size is that the boundary was approximately 7 kilometres long (over four miles). 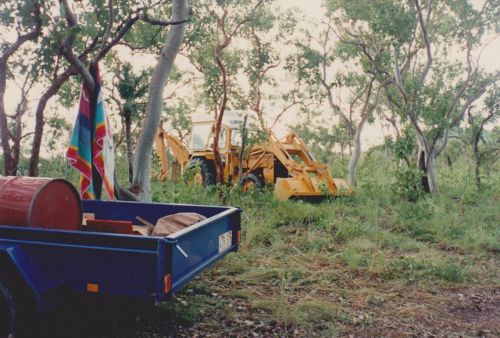 Facing inland, to the left was a small cliff, and to the right was way too steep to contemplate. That left straight ahead, or back out onto the road to find a lower way in. 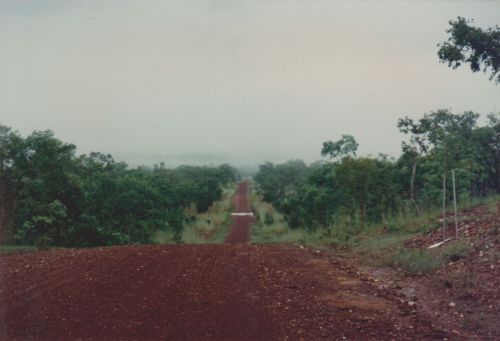 Above is the main road. Moving down lower to put a road in wasn’t good, the flatland down there was where the creek overflowed and spread out across the flat, the white streak showing across the road (above) was water, hardly suitable for a driveway. Looking the other way along the main road (below) showed it might be pretty boggy, too. 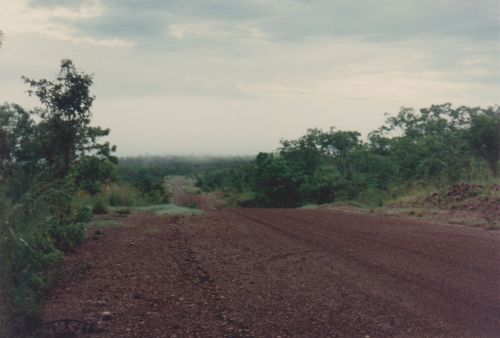 It looked like I had to go over the hill, so over the hill I went. I knew how to start the backhoe (a good thing), and I knew how to turn off the engine again, which is not the same as turning the key off (important to know – we both discovered that the hard way), so I spent a little time experimenting the with pedals and the levers until I had it figured, then trundled off. 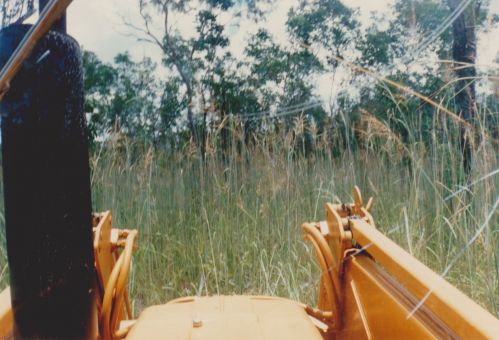 Ahead it looked like this (above), the spear grass hiding where I was going. Although the grass was high and I couldn’t see my way clearly, I was very pleased to find I could make my way between the trees quite well (we didn’t lose a single tree). I don’t think I’ve pointed out to everyone that we did not get the land in order to farm it or run cattle or sheep. We wanted the wilderness. We also had a legal responsibility to put firebreaks in around the boundary, which was the primary reason Greg wanted the backhoe. We also needed access. We accessed only a handful of acres, leaving 240 to 245 acres completely untouched.

As for my first run at the road, behind me it looked like this (below) as I headed off down the hill. Yes, I had parked and walked back to take that picture, I was by myself. 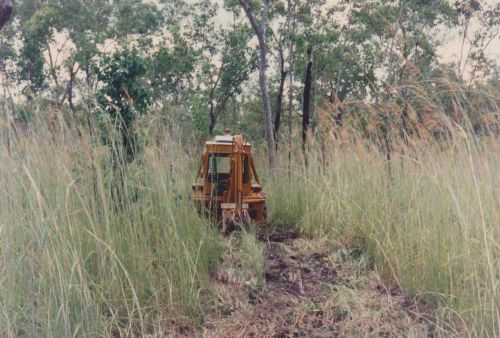 I ran the road for a full kilometre (roughly 0.6 miles). Coming back up the hill seemed a lot steeper, so I kept the bucket (the front loader) low. It took several runs up and down to make the road quite clear. Then I got adventurous and headed to the creek – where I promptly bogged the thing. 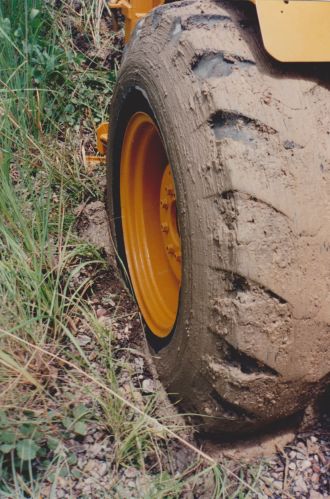 The most wonderful thing about the backhoe was it had legs you could put down. It was meant for steadying the machine so it doesn’t roll about when you’re shifting or lifting something heavy, but it was great for lifting the body out of a bog, too. That raised the wheel and I tossed under it what I could by way of rocks and grasses, until it gave me traction to get out. 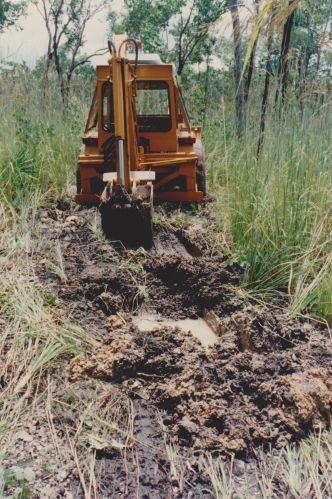 Of course getting out meant burying everything, so it still looked like this (above), and I was bogged again. Yes, it does look as though I had been messing about with the digger, but I had not – that was purely the wheels in the mud.

I decided then that being close to the creek was not such a good idea. I inched away, getting bogged a total of four times before I got out again. 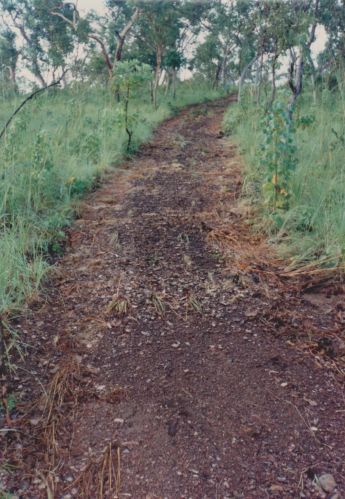 The picture above doesn’t do the steepness of the hill justice, but nevertheless this was the first road I put in. I showed it to Greg that night by car. I didn’t want to wait until the weekend to show him in daylight, so he got a tour by headlight. 😀

His comment was, “This is steep. How did you get the backhoe back up again? Did you come up backwards?” When I told him that, no, I had not, he said. “Bloody hell. I would have!”

The exercise had taken the entire day. There was plenty more to do, but we’ll jump over the boring moving-again bits of the story and look at other aspects.

Cheers all, have a great day. 🙂

1st book in The Khekarian Series. Click cover to go to Amazon Books and Kindle.

2nd book in the Khekarian Series - Click cover to go to Amazon Books and Kindle.

How to Buy a Paperback or Kindle copy

Click on the images above to go to Amazon and Kindle.

Books are roughly 600 pages each.

Looking for a category?